…first I feared that children won’t be interested, they will not listen to me and the lesson will fail. But after two days of teaching in the 7th grade, a pupil came up to me, told me about the conflict he was having and asked for help. I listened to him with great attention and gave several advices. My joy was boundless when he thanked me the next day, saying that my advice helped him to solve the conflict peacefully.
The example of this boy was the greatest estimation for me…

In order to spread skills on peace culture formation, peace education and peaceful conflict resolution among a larger number of schoolchildren it was decided to organize “open” peace classes in 5 schools involved in the project. Peace Center members were to conduct classes by peer-to-peer method.
First step was the development of theoretical and didactic materials necessary for conducting “open” classes; the second was the training of Centers’ members as peer to peer educators.
At first pupils were cautious to know they must act in the place of educators. They feared; if they were not listened to, if they couldn’t present the material well, if the lesson wouldn’t be interesting, etc., but over time their fear passed and they became more confident.
With the help of our specialists, the members of the centers for nearly a month got ready for the “Open” class, learned materials, got familiar with the methods of interactive teaching.
From the 25 members of each Center, groups were formed of 2-3, sometimes 4-5 people, who first tried to conduct the “Open” class for the members of their Centers. During each lesson, one of the groups conducted the class, while the members of the Center listened and at the end of the lesson discussed it, pointed out its positive sides, revealed deficiencies. That helped not only the direct “educators”, but also the other groups to better conduct the class, not repeat the deficiencies of the previous groups, overcome uncertainty they had and study the material in-depth.

With its own initiative, each group also thought of a small performance, presenting some conflict situation. The performed conflict was deepening because the participants didn’t have appropriate knowledge and skills.

But, just several minutes later when the group of educators presented themselves to the class and briefly told about the school’s “Peace Education” Center and its activities, presented the theme of the lesson, everything became interesting for schoolchildren. To the raise of interest among them especially helped the illuminated posters fastened in the classroom, which in the appearance of talking and risible dwarfs were presenting the skills of peaceful conflict resolution. So, when the anxiety and tension of the first few minutes were left behind, our educators, like experienced teachers, were able to conduct the class, present the whole material, revise the lesson through questions, and what is most important, they could make the class participate in the small performances. At the end of the “Open” class almost all the pupils with great enthusiasm were telling about the conflict situations they have had and were trying to find peaceful solutions for them.

Discussion, analysis of monitoring results and lesson evaluation were made after the “open” classes. First members of the group conducting the lesson gave their objective evaluation of the lesson. It was very important for us as the managers of the project, because during discussions there was sound criticism and self-criticism. Such criticism instead of bringing to conflicts helped to bring out the noticed deficiencies and try not to repeat them. It must be mentioned that very often the educators themselves were “very strict” to their deficiencies and had a desire to do their best to make the material more understandable.

It became clear from the analysis of the testing’s results, that nearly 98% of schoolchildren thought that a lesson like that was very necessary. Several examples from pupils’ answers;

“…yes it’s very necessary. Those skills and commandments will come in handy in all our life. This was a lesson of life…”, “…the lesson helped us to be more patient…”, “…we learned that we must explain and not quarrel…”, “…if we had such skills earlier we could avoid many conflicts…”

To the question “How did this lesson differ from the others?”, the schoolchildren gave very interesting answers; “…this lesson gave the right and chance of speaking to all of us …”, “ … we could express our opinion and not fear from the thought, that we wouldn’t be understood…”, “…at first it was unusual to see pupils of our age in the role of teachers, but they were talking so interestingly, I want to become a member of “Peace” center, too…”. While, a pupil from 5th grade expressed the importance of the lesson with the following words; “… this lesson is very necessary, it teaches to take the right road in life, it is especially pleasant, when a pupil of your age is conducting the lesson, because he/she is a person who better understands your problems…”

During 2002-2010 Peer-to-peer education was implemented more than 3500 schoolchildren in 18 schools and about  500 students at Gyumri state Pedagogical institute.

As managers of the project, the most important thing for us is that after the “Peace” class schoolchildren are able to make changes in their behavior, so that they can think about the raised questions, reassess their behavior and relations with the surrounding people.

Applying peace education skills in the USA as an exchange student

The greatest success of our project is Inga Daniyelyan’s achievement (one of the members of the Peace Education Center at School # 7). While spending a year at Spoken, Washington – one of the remote states of the US, Inga not only applied her skills and knowledge gained at the Peace Center, but also transferred and taught those to her American classmates. In high school she was the leader, facilitating interactions between pupils and helped many schoolchildren and even teachers to resolve conflicts. Below is the letter, which we
received from Inga back in 2006.

Dear WFD,
This is Inga Danielyan from school #7.
I hope you remember me. I am e-mailing you to tell how thankful I am for all that I learned during last two years. Your classes about Your classes about conflicts and peace helped me a lot this year, because I was far away from my family, friends, culture and everything else that I was surrounded with for many years. I was out of my comfort zone and plus homesickness and feeling of being alone making you be more stressed out are great for getting depressed and have a lot of conflicts with people around you. I will always remember the things we learned during out classes and it will help me go through my year much better and gets much more life changing experiments.

I want to say thank you one more time and hope that we will work together after I will be back in Armenia.

Miss you a lot,
Inga

Peer to peer education: from Gyumri to Bayandur

The practice of peer-to-peer education has been actively used by different peace education centers. Usually, a group of peace center members would organize a class for their peers in the same school or in another school.  A few former members of Peace education center from school #2 in Gyumri expressed their willingness to conduct peer-to-peer education in different schools, thus refresh and re-apply their knowledge. We were very excited about this initiative and suggested to conduct the class for their mates at Bayandur community school.

Anna Hovhannisyan and Siranuysh Sarikyan, both eight graders (15 years old) from Gyumri school #2 have shared their opinions about peace education classes and their impressions after organizing a class in Bayandur community. 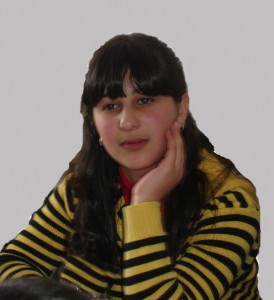 “Today (May 14, 2009) I spent a wonderful day in Bayandur village. It was great to visit the beautiful school in Bayandur, to communicate with children who were looking at us with interest in their eyes. I am so happy and excited that I do not even know how to express and describe my emotions. We left the village with wonderful impressions. There was nothing that I did not like, everything was great – to the extent that at one point I wished I could stay there.

I even thought about changing my school so that I could study with these children whom I did not want to leave. 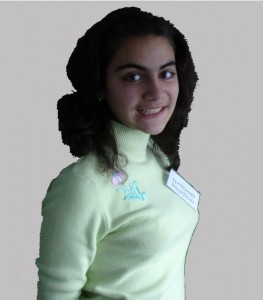 “I have great impressions from peer-to-peer education conducted in Bayandur village school. I am now HAPPY, because I saw the shining eyes of the children, their smiles, heard their responses, received their positive energy. Now it seems to me that my heart is jumping out from my chest and flying towards the blue sky.   This was the first time when I was so satisfied with the results of my work. I know that we also left great impressions on the children. To be honest, this meeting provided me with an opportunity to discover what kind of impressions people get from my personality. I am now very happy and joyful, I want to dance and jump up…

Conversation with the children went great and we bacame very close. I have difficulties in terms of putting all my feelings into the words. I just can say one thing – now I am very happy. I would like to have the chance to participate in such event again and to transfer our knowledge to village children”.

Peer-to-peer education proved to br truly the best application of the knowledge gained in the Center.