…I have changed very much and I felt it when I was still participating in the classes-my character and way of thinking changed. Previously I used to “label” people a lot and provoke conflicts out of nothing, but now I don’t do tha anymore. In my opinion acquired knowledge is very important, especially in terms of makeing proper decisions and helping other people, should it be necessary. Before that peace was not very important to me. Then I realized that there is nothing more important in this world than peace…”, – Angelika Simonyan, School #2 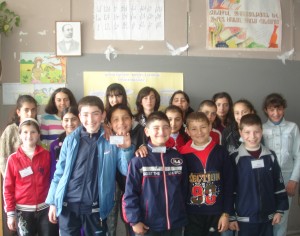 During the past years, several local and international organizations, in partnership with the national Institute of Education of the RA Ministry of Education and Science, have been working on integration of the ideas of peace, conflict resolution and tolerance in the curriculum of schools.The purpose is clear for everyone. Today, more than ever, it is necessary to educate citizens who are able to protect their rights and respect the rights of others and who are able to resolve the conflicts in peaceful way and be tolerant. “Women for Development” NGO was among the first organizations to initiate such education in Armenia. In 2002 we started the implementation of the “Peace and Conflict Peaceful Resolution Education in Schools of Armenia” project. The main objective of the project was formation of the ideas of peace culture and conflict resolution among teachers and schoolchildren. In frames of the project, Peace Education Centers were established in 16 schools of Shirak province and Gyumri State Pedagogical Institute. The classes in the Centers were being conducted based on the methodological handbook, which was developed by the specialists from the NationalInstitute of Education as well as WFD.

The results of the abovementioned research showed that those schoolchildren, who took the PeaceEducation course, possess sufficient skills and knowledge in conflict analysis and identification of the causes of the conflict, as well as communication and methods of conflict resolution.

They have gained values, such as:

According to the teachers and parents, the schoolchildren participating in the program have become tolerant of each other, the conflict situations have decreased, the conflicts that have arisen are mainly resolved peacefully, without insulting human dignity.

“Peace and Conflict Resolution in Schools” project was implemented in 360schools of 11 Armenian provinces, reaching out to more than 2100 teachers/class heads and approximately 40000 pupils of 6-9thforms. At this stage the main goal of the project was to create peaceful environment in schools of Armenia, thus contributing to decreasing the number of conflict situations with violent outcomes.

Teachers involved in the project, mention:

The project is being implemented in the provinces with the support of the provincial branches of the National Institute of Education and their specialists.