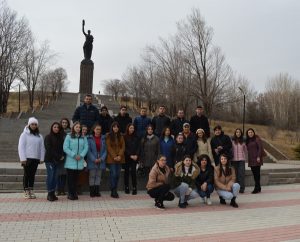 War is one of the worst evils of humanity, and unfortunately there have been very rare warless times in the history of humankind. Wars happened in all centuries, took lives of numerous people, brought horrific destructions, forced migrations for countless people, made them impoverished and destined for grieving for long time.

World War II (WWII), which started on September 1, 1939, was the biggest and deadliest war in the history. Lasting for six years, this war included all the great powers, with direct participation of over 100 million people from 30 countries. Death toll in this war is approximately 80 million, which includes victims among peaceful population.

Presently, humankind is facing a risk of another World War. Ongoing wars, terrorist attacks and genocides make it extremely important to spread the ideas of peace and humanity through various projects and events.

In frames of the “Meet UP” micro grants projects funded by German Foundation EVZ, on December 4, 2022, Remembrance and Peace Forum event was organized for WFD NGO beneficiary youth active group members. The goal of the Forum was to once again emphasize the importance of peace and living in a non-violent, warless world through remembering history. Youth will pass the information acquired during the Forum to their peers, and as carriers of these memories, will have their input in building safer and more peaceful world.

World War II, or the Great Patriotic War, as it was referred to in the former Soviet Republics, has truly been one of the biggest disasters faced by humanity, and small Armenia was also involved in this historical event. Particularly, second largest city of Armenia – Gyumri has its share of history in the WW II.

In frames of the Forum, 25 youth participated in a walking tour and historical excursion to Gyumri’s Mother Armenia monumental complex, dedicated to the memory of the victims of the Great Patriotic War. Professional tour guide Aram Khachatryan presented the major events of the World War II, Armenia’s participation in the War, and the history of building the monument complex.

Next stop of the historical walking tour was the cemetery of the German prisoners of war (POWs) located in Gyumri. Presently, very few people are aware of the fact that it was preserved and reconstructed. The cemetery of German POWs is a unique symbol of the fact that they have been victims of the deadliest war, regardless the country and nationality.

Remembrance and Peace Forum became a unique opportunity for youth to once again remember the history and pay respects to the war victims. Upon the end of the Forum, youth shared impressions of the day amongst each other, as well as the acquired information. They exchanged opinions and emphasized the importance of passing this knowledge to their peers.

As part of the Forum, participants also had an opportunity to watch “To Doll for Amalya” short movie, which has been shot on the initiative of the German Honorary Consul in Gyumri and local “Shirak” television. This film is also dedicated to the POWs kept in Gyumri and is based on true story.

Forum participants also received informational leaflets and handmade bags, which were made by the members of Torosgyugh youth active group, which made this event even more memorable. This project has been a great tribute to human rights, historical heritage and youth participation and entrepreneurship, all at once! Thank you Foundation EVZ for this opportunity.