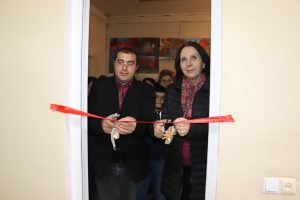 On November 22nd, “Sarapat” NGO and local youth active group organized the community celebration and projects opening ceremony event, with the goal of summing up the works implemented in Sarapat community during past 1.5 years and announcing the official openings of “Luse” children’s development center and “Innovative Library and Reading Room”.

Both development center and library/reading room were renovated, furnished, and equipped with the joint financial assistance from “Women for Development” NGO and Ashotsk mayor’s office. The total budget for two projects was 1.788.890 AMD, out of which 1.433.890 was invested by WFD NGO, 330.000 AMD was contributed by the mayor’s office, and 25.000 AMD was fundraised by community residents. Many guests attended the event, including Ashotsk mayor’s office staff, representatives of partner organizations, residents of Sarapat and neighboring communities.

The guests highly valued the implemented works and spoke about the importance of projects targeted at improving the quality of life in the village and promoting community mobilization.

Hamlet Avetisyan, the staff secretary of Ashotsk Mayor’s office, spoke about the Local Government – NGO long-term and successful collaboration, and WFD NGO community development projects coordinator Armine Shiroyan presented a brief report on all the projects being implemented by WFD NGO in Sarapat so far.

Upon the end of the official program, guests took a tour of the newly opened development center and community library and reading room, took a deep look at the building conditions and implemented works, and promised to support the development and expansion of these projects within the scope of their possibilities. Sakharov Armenian Human Rights Center representatives presented development games and other gifts to the children.

Guests gave special credit to the community residents, who voluntarily implemented huge amount of construction works. WFD NGO awarded certificates to all volunteers for their active involvement in resolution of community issues and serving as role models for others for becoming more mobilized and motivated. Andranik Yervandyan passed his special gratitude to those community members, who despite being abroad for labor works, still financially supported the community celebration event.

Photos from the event