Skip to content
Women for Development > News > “Peace and Conflict Resolution Education in Schools”: a handbook for teachers 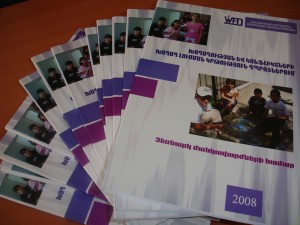 One of the most important achievements of the organisation throughout the year was publication of “Peace and Conflict Resolution Education in Schools” handbook for teachers.

Back in December 2007 a Memorandum of Understanding was signed between WFD NGO and the National Institute of Education. According to the Memorandum, the National Institute of Education would assign specialists to work jointly with WFD on the development of materials to be included in the “Peace and Conflict Resolution Education in Schools” handbook. Another article of the Memorandum was to support the organisation in terms of organising trainings for teachers.

Immediately after signing the Memorandum a working group was formed with the goal of developing and editing the final version of the handbook; including WFD NGO President Gohar Markosyan, Education Department Officer Susanna Ghazaryan, a member of the same Department Julieta Chaloyan, Deputy Director of the National Institute of Education Vardan Ghandilyan and NIE Specialist Serob Khachatryan. In March 2008 the handbook was ready for publication.