A working meeting with community center officers from eight beneficiary communities took place at WFD office on August 18, 2012. The goal of the meeting was to make some improvements in the work community center officers, as well as to introduce and discuss the new forms of planning and quarterly reporting. Another point in the agenda was presentation of the draft version of Lanjik community strategic plan for 2012-2014. 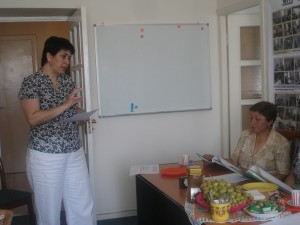 Strategic plans for the other communities will be developed soon.  Gohar Markosyan, the President of WFD, once again presented the goal and objectives of the “Community Mobilization through Increasing Participation, Healthy Lifestyle and Peace Education in Armenia” project. She spoke about the main principles and effectiveness of community mobilization and raising participation. 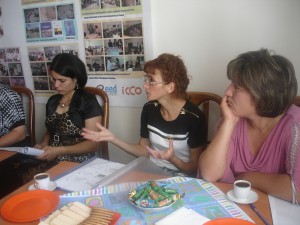 They also talked about the importance of volunteering: “volunteering plays a central role in community mobilization. Devoting time, knowledge and abilities to the needs of the society voluntarily is a new culture in Armenia, which is still in the stage of formation and development. Though we have carried out quite a lot of work during the last 2-3 years and there is certain progress in breaking the stereotypes towards volunteer work, this cannot be considered enough and we still have to work a lot, because volunteerism strengthens citizens, makes them confident of their own abilities, inspire them to be most involved and respected in their communities. As a result these communities become most mobilized,”-mentioned Gohar Markosyan. Participants of the meeting shared their experience gained through their work.