On August 21, 2012 the official opening ceremony of Culture House in Torosguygh village took place. Fundamental renovation of the House carried out on the initiative of “Shirak” charity foundation though family resources of Valery Vladimir Rudakov, Chairman of the Board of Directors of the Gold Mining Company Polus LTD. 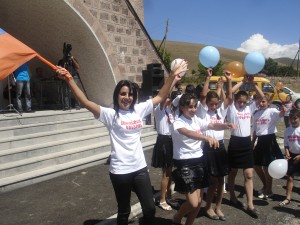 Renovation of the Culture House started back in April 2012, and it cost about 32 million AMD. Highly appreciating the big contribution of Sergey Bondarenko (manager of former USSR “Glav-almaz-zoloto” construction corporation) and respecting his philanthropist initiatives, the Council of Torosgyugh community decided to name the Culture House after S. Bondarenko. 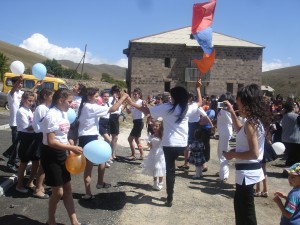 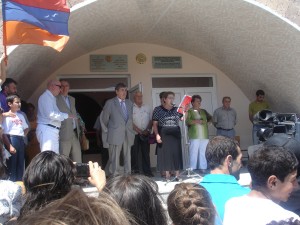 Valery Rudakov and members of his family, “Shirak” Charity foundation Board members, the representatives of RA Shirak Regional Administration and other officials were present at the opening ceremony. The honour of cutting the ribbon was given to the benefactor. Afterwards the event continued in the newly opened Culture House.  The event was prepared on volunteers’ and Mariamik Ghukasyan’s initiative, Torosgyugh community center officer. The event included reciting patriotic poems, songs and dances.  It is worth mentioning that by the personal resources of the philanthropist the Culture Houses in Goghovit and Arpeni communities of Shirak region were also renovated and handed into exploitation.