Since 1991 more than 3700 organizations in about 164 countries participate in the annual “16 Days of Activism against Gender Violence” international campaign, which calls to eliminate all kinds of violence against women. The Campaign starts on November 25 and lasts till December 10. Roots of the campaign are in the violent murder of 14 Canadian students in 1989, which also became basis for another campaign – “White ribbons”, which symbolizes refusal of violence against women.

Starting from 2001 the campaign is also carried out in Armenia, and its goal is to emphasize once again the importance of the gender violence problem throughout the world and in Armenia, as well as to involve a bigger number of participants.

In the frames of the campaign officers and volunteers of WFD beneficiary communities participated in the training “AIDS problem and projects directed to its Prevention in Armenia”, conducted by Jina Sargizova, “16 Days of Activism against Gender Violence” campaign coordinator.

Participants of the training got acquainted with the phenomenon of trafficking and violence against men, 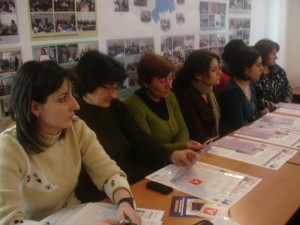 Results of different sociological surveys about social-political participation in Armenia and gender discrimination against women were presented at the training. Numerous examples and figures were brought to show the intolerant attitude of the society, stereotypes and unequal conditions towards women.

A separate topic of discussion became the issue of HIV/AIDS in Armenia and activities directed to its prevention.  Participants also had a chance to watch and discuss the film “The Butterfly” in memory of 19-year-old Zaruhi Petrosyan, based on true stories about violence against women in Armenia.