On June 24 a meeting of community center officers and volunteers of eight villages of Shirak region took place at Bayandur community center. The goal of the meeting was to summarize the work carried out in the community centers during the past 3 months.  Bayandur prepared a small concert for the guests, during which pupils of the Arts school appeared on the stage with their performance and with unique Bayandur musical instrument (parkapzuk) and dance. In the beginning of the meeting Gohar Markosyan, the President of WFD and the community centers officers presented the implemented activities, spoke about the achievements, problems and its’ possible solution. In their reports participants mentioned the positive changes, which were caused by the activities at community centers and are obvious today in almost all communities. 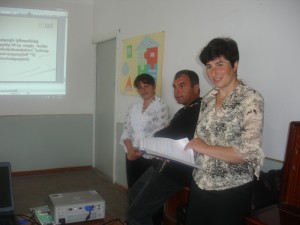 Due to the efforts of the officers and activists all holidays are now celebrated in the villages, different clubs are established and are actively functioning, people are trying to revive many old and forgotten traditions. According to their words, community members actively participate in all the events and meetings; community centers’ doors are always open for them.

Sophia Sargsyan and Lora Hovhannisyan, officers of Bayandur community center, mentioned enthusiastically that they had involved even elderly people in their work to make the above-mentioned concert more interesting. Older people in their 80’s had taught youth old and sometimes already forgotten dances and songs. Participants of the meeting approved the approach of meeting and reporting in different communities. They mentioned that each community is interesting and unique in its own way and people have a lot to learn from each other. The next reporting meeting will be held in Lanjik community.