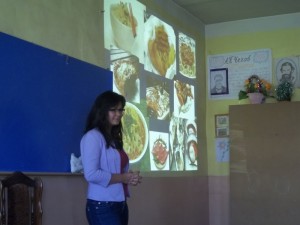 On June 18-19, 2011 Arianna Caoilli had meetings in the community centers of the organization’s beneficiary communities and spoke about Australia’s history, culture, values and traditions. Arianna is only 24, but she already has studied politics, economics and trade. Arianna is now working on her master thesis in the topic of economic development in Armenia. The young lady born in the Philippines, educated in Australia and Great Britain, became interested in WFD’s activities

and already paid her second visit to Gyumri. Meetings in Goghovit, Musayelyan and Krashen communities were held in a very warm and easy atmosphere. Participants asked Arianna many questions about how youth spends their free time in Australia, gender equality, relations between men and women in the family and society in general. It was very interesting for the participants to listen to someone who is well aware of not only Australian and Philippines culture, but also knows Armenian culture and has many Armenian friends, including famous chess gross master Levon Aronyan.