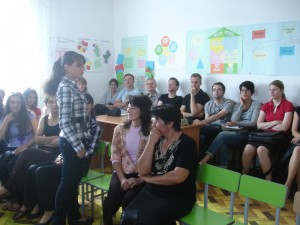 On September 5, 2010, WFD hosted a delegation from the Federal Republic of Germany, which consisted of Research Associates of Members of German Bundestag, a journalist, representatives of different political parties, the Protestant and Evangelistic church and EED (Evangelischer Entwicklungsdient e.V.).
The guests visited one of the beneficiary villages – Goghovit, where WFD has established a community center in the frames of its ongoing project 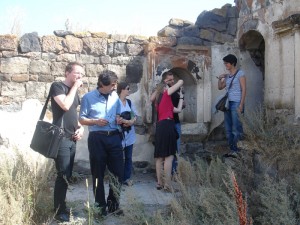 “Creation of Healthy and Peaceful Communities” through financial support of EED and ICCO.  They had a meeting with community members, got acquainted with their problems and received answers to their questions. Guests walked around the village, visited the ruins of the old church and village medical point. They were also introduced to the details of the project implemented by WFD, which deals with the issues of Peace education, Conflicts Peaceful Resolution and healthy lifestyle.

Members of the embroidery club established in the community center and lead by one of the volunteers, prepared a small exhibition of works.