It has been already two years since members of Peace education centers from the organization’s beneficiary schools celebrate the International Day of Peace on September 21st, which has become a new holiday for our schoolchildren. 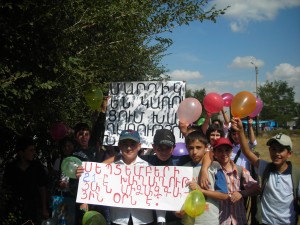 The organized events are various. Last year more than 90 pupils (8th graders) from School #20 after George Byron organized Peace Parade on September 21st. Pupils were carrying posters with “People are building peace” slogan written in Armenian and English and balloons in their hands. The parade took off from Ch. Aznavour Square and continued towards the school. On their way pupils presented the passers-by with balloons decorated with words associated with peace.

In the surrounding area of School #9 chalk-drawing contest was organized. Pupils of School #29 organized a presentation, where pictures of various types of weapons were shown and children spoke about enormous amounts of money being spent of weapon production in different countries and the important alternative ways for spending these sums. Pupils even transformed the toy gun into a tray filled out with chocolates, which was disseminated to the guests.

Events organized in Schools #26 and #30 involved the entire school community and became a great celebration for all those who were in attendance. All events were videotaped and broadcasted by local TV channels, and received positive feedback from the citizens of Gyumri.  This year as well schoolchildren participated in the events dedicated to the International Day of Peace. They found out when the idea of celebrating the Day of Peace occurred, became familiar with the history of UN’s Peace Bell and prepared Peace Posters. On the posters they underlined the contours of their hands and wrote what is Peace for them. Afterwards they read the descriptions and glued the “hands” on the posters. In School #26 children posted their ideas and wishes on the branches of Peace Tree. 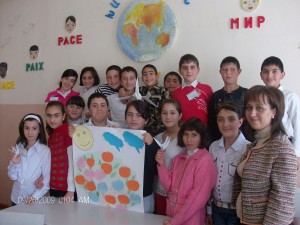 Here are some of pupils’ thoughts: