In June-July 2009 the NGO “Women for Development” hosted two volunteers from Canada and Argentina, who were in Armenia in the frames of the project being implemented by the charity foundation “Birthright Armenia”. 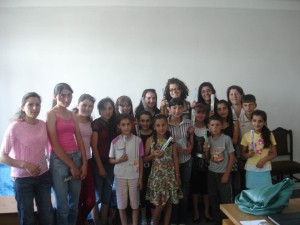 Cynthia El-Khoury studies at the department of Dental Care of Montreal University, and Marianna Mardirossian graduated from the department of Biology of Buenos Aires University. Together with the project team they visited the community centers in the target villages, got acquainted with the activities of the organisation and its objectives, participated in the organised activities.

According to their own words, the trainings conducted by the organization’s Healthcare department responsible Karine Haroyan on the issues of reproductive health and HIV/AIDS were very interesting and instructive, the contacts with the rural population were also very interesting. According to the preliminary agreement, they conducted seminars on the topics “Genetics” and “Dental Care” in the Community Centers of the villages Goghovit, Musayelyan, Bayndur, Lanjik and Krashen for more than 170 young boys and girls. The joint work of the volunteers with WFD team brought fresh air and interest in the communities. As a result more young people participated in the organized activities.