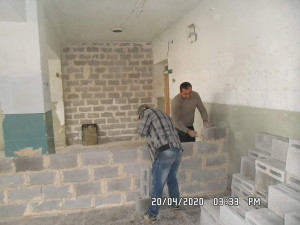 Since January 2018, because of the absence of their own space, the members of the youth active group functioning in the community have had their meetings in the Arts school dance group room or in the house of one of the group members. Very often this caused inconvenience for the youngsters and hindered their normal work. Following the suggestion of Mr. Hakobyan, the head of the community, one of the rooms in Arts school was given to the Active Youth group, and after renovation it will be used not only by the youngsters, but also as a training room by the Forum Theatre group members.

A computer and a projector too are purchased for the Youth Center. This will support organization of most productive events by the youngsters. The furniture for the Center was purchased in frames of the previous project. The total budget of the project is 837 000 AMD, out of which 600 000 AMD is contributed by WFD NGO, 200 000 AMD – by Anushavan municipality, and the remaining 37 000 AMD is a contribution by one of the community members, whose name is not published at his request.