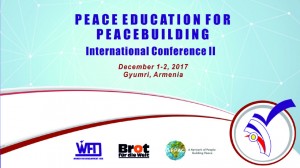 The international conference has passed, but the impressions gained during the event and the fruitful collaboration among the 130 participants from 25 countries remain. It was the second conference on peacebuilding, hosted by “Women for Development” NGO, follow-up of the one in 2007. While the first event intended to present mainly the work of WFD itself, this year´s conference also facilitated the intellectual exchange of others, offering them platform, voice and translation and bringing together different field specialists. Among the keynote speakers were Werner Wintersteiner (Center of Peace Research and Peace Education, Austria), Jennifer Batton (GPPAC´s Chair of PEWG, USA), Sanam Naraghi-Anderlini (ICAN, UK), Isabella Sargsyan (Eurasia Partnership Foundation, Armenia) and Gulnara Shahinian (Democracy Today, Armenia).

Speakers from Austria to Australia, Ghana to Colombia and Netherlands to Japan, reflected on past experiences and set future goals on diverse topics such as domestic violence, violent extremism, global citizenship, Caucasian conflict resolution and many more. The participants and the speakers affirmed that all the challenges and problems faced worldwide in establishing peace and in the area of peacebuilding demand active participation of various representatives of the society. Through the conference, they expressed the appeal to contribute to the expansion of peace education through formal and non-formal teaching and the creation of a culture of peace among schoolchildren and youth as essential means to establishing peace and preventing violence and terrorism.

The conference and the following workshop-day enabled practitioners form different continents to introduce their best practices, success stories worth sharing, to expand their professional network and to exchange opinions on the ongoing challenges, which accompany the implementation of peace education worldwide. Surprisingly, there were plenty of similarities in spite of the specific regional context.

The impact and the outreach of the event won´t have been possible without the support, sponsorship and collaboration of GPPAC´s Peace Education Working Group taking part actively on the side of the speakers.

The official host of the conference itself was Gyumri Technology Center, the most modern equipped building in the city, which offered great opportunity for impeccable programme flow, parallel workshops and cozy time between the sessions during the coffee-break and the lunch on the spot.

The conference offered the participants the opportunity to get to know the Armenian culture, including the typical folks dance Khochari, performed together with a local dance group in the Youth Center Hayordac Tun. There they were also shown an exhibition of children´s painting – the result of the art contest “I am a Sower of Peace”, carried out annually by “Women for Development” NGO, UN Office Yerevan and WCC Armenia Round Table. Another evening highlight was the visit to Black Fortress – an old abandoned Russian fortress with spectacular architecture.

The closing of the conference was marked by classical live music, a lot of positive energy and mutual gratitude for the productive exchange and, last but not least, by the celebration of WFD NGO 20th anniversary since its foundation in December 1997 in Gyumri.

There was great interest in the work of the international speakers from the side of the local residents in Gyumri. Following the conference, GPPAC Peace Education Working Group members Kesia-Onam Bijou Birch, Carlos José González Hernández and Ahmed Baqir Bukli were welcomed by the rector and the professors of Shirak State University. The guests met with the rector Sahak Minasyan and vice-rector Anahit Farmanyan who asked for a possible collaboration with the GPPAC members via WFD NGO, for sharing the experience and lessons learnt in different countries with the purpose to integrate “Conflict management education” in the University in a non-formal education method.

“Women for Development” NGO as host of the international conference “Peace Education for peacebuilding” and as an active player on the field for the past 15 years believes that the integration of peace education into the education system worldwide is one of the most important steps in the journey of achieving peace. That is at the same time the reason to dedicate its efforts towards the goal and the motivation for the future projects.

Mass media coverage of the conference 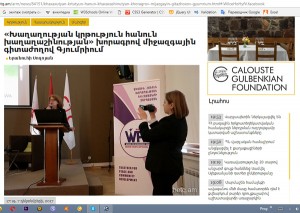 You can also read about the conference in hetq.am 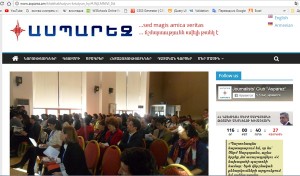 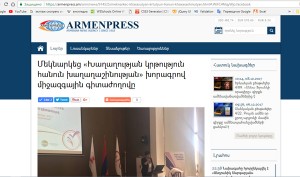 Armenpress.am wrote up about the occasion 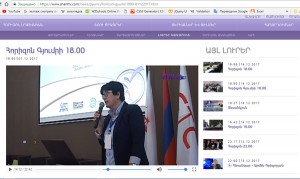 Shant TV also covered the opening ceremony of the conference (watch at 14:00 minute)