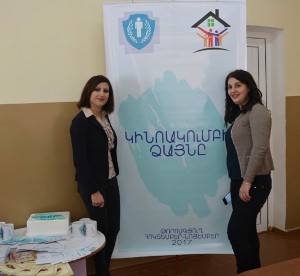 The presentation of the “The Voice of the Cinema Club” project implemented with the joint efforts of Torosgyugh initiative group and Tsoghamarg’s “Community for Peace and Development” NGO took place on December 15 in Torosgyugh.

The project aimed to contribute to the more active lifestyle in Torosgyugh, Tsoghamarg, Arpeni and Goghovit communities of Sarapat enlarged community, as well as to the mobilization of the neighboring communities through organizing productive leisure-time activities for the youth and community members, and creating a platform for joint discussions.
“Women for Development” NGO, “Biosophia”, “The Third Nature” NGO, the representatives of “The A. D. Sakharov Armenian Human Rights Protection Center” NGO, Gyumri branch were present and congratulated the newly established organization for the successful implementation of the project, wishing them lots of new projects that would contribute to the improvement of the life in the communities and will help to solve the existing problems.

Those youth and volunteers engaged in the project also said their thank you for the effective and interesting project. They mentioned that thanks to the project they became more confident, freely expressed their ideas, gained new knowledge and, most important, the communication among the youth from the neighboring villages became livelier.

At the close of the event Thank You letters and small souvenirs were handed to all the volunteers and organizations that showed support to the project.

It should be stated that the ” Cinema Club” project implemented in Torosgyugh in 2016 by WFD NGO served grounds for the new “The Voice of the Cinema Club” project, whilst due to the small grant allocated by “The A. D. Sakharov Armenian Human Rights Protection Center” NGO and the financial support of Sarapat municipality it was possible to furnish the cinema club with new equipments, and involve 4 communities instead of the envisaged 1.