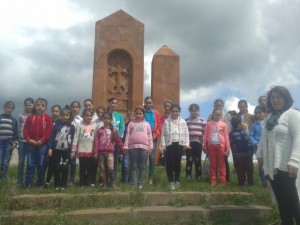 May triple-holidays were also celebrated in Lanjik community. After paying tribute at the monument perpetuating the memory of the victims of the Great Patriotic War and Artsakh war, the event continued in the Community centre of the village.
By the initiative of the Community centre officer Armenuhi Arakelyan and with the support of the village mayor Ara Mardoyan the children recited, performed patriotic songs and dances.
Mothers and wives of deceased soldiers, as well as those whose sons serve in the Army today were present at the event.
Many words of gratitude were said in the memory of those Armenian soldiers who forged the path to the Great Patriotic War and gave their life for the peace of our country.