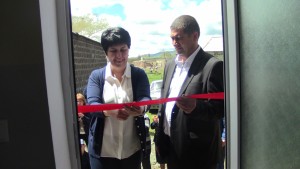 “May 9 is not just an ordinary date for each and every Armenian. It is the symbol of our bright future and ongoing life and it is not by chance that the official opening and presentation of our two projects coincided with this day. This year 3 more festivals were added to May triple- holidays in Tsoghamarg; opening of the Events hall, presentation of the new costumes for our community’s dance group students and the placing of the cross on the village chapel”, with this words began his speech Tsoghamarg village mayor Gnel Barseghyan during the opening ceremony of the Events hall. He thanked “Women for Development”, “Friends of Armenia” organizations and the community residents, who helped them to bring to life the project of restoring the events hall and its partial furnishing.

“For me those projects are victory, too. If the Army today protects our borders with dignity, it is our duty to keep the back through enriching and empowering our communities” he concluded.

WFD NGO president Gohar Markosyan also greeted and thanked the audience highlighting the personal example and compassion of the village mayor, the Community centre’s active work, the community’s mobilization and devotion. She reported in detail about the implemented work and wished that only happy events were celebrated in that beautiful and cosy hall afterwards.

The festive mood later on continued in the school hall where another project presentation implemented with the financial support of WFD NGO took place. “Arpi” dance ensemble established in Tsoghamarg by Gyumri “Endanik” centre performed new dances in new costumes before the community for the first time.
”National dance costumes for Tsoghamarg dance group” project initiator Arpine Nikolyan presented the project background and the achievements highly appreciating WFD NGO role and functioning in their communities. In her turn Gohar Markosyan thanked the members and volunteers of the project’s initiator group for the nice idea and the beautiful costumes stating that volunteers serve as an example for their co-villagers to be more active and get involved in their personal problems.