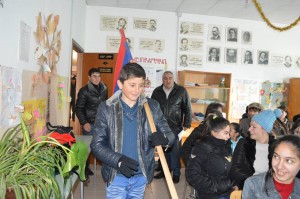 An event titled “Glory to Armenian Army” and dedicated to the 24th anniversary of the formation of the Armenian Army was held at Tsoghamarg secondary school on D. Mirakyan’s initiative. Pupils, teachers and parents attended the event. It started with a solemn ceremony beneath the Armenian flag, with the performance of the anthem of the Republic of Armenia. After congratulations from Derenik Mirakyan, pupils made their speech. Head and the vice-principle of the school also came up with congratulations, after which A. Arshakyan handed Certificates of Appreciation to the parents of the soldiers serving in the Army. At the close of the event the villagers and the parents also gave speech.
Congratulations on this special holiday, Armenian Army! Glory to the Armenian Army, to its soldier, to those mothers that gave birth to their soldiers and to all Armenian people!

“Women for Development” NGO also congratulates all the soldiers on the occasion of the one of the most cherished holiday, the 24th anniversary of the formation of the Armenian Army. We bow to the eternal memory of the heroes having sacrificed their life for the protection of their motherland, meantime wishing safe and peaceful service to all soldiers in the army.