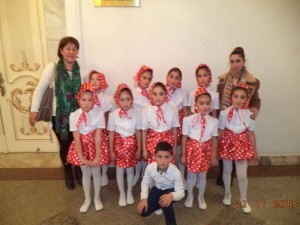 These days, juniors’ dance group of Lanjik community participated in the Song and Dance friendly festival at Yerevan concert hall after Arno Babajanyan. This was the first concert of the newly established Lanjik dance studio. 80 dance groups from Armenia’s various marzes and Georgia were participating in the festival, while Lanjik’s dance group was the youngest among them. By the words of Ruzanna Pahlevanyan, dance teacher, though the children were excited they performed rather well and attracted the audience’s attention.
In frames of the festival Lanjik Dance Studio and art director Ruzanna Pahlevanyan were granted a medal and a diploma by Children’s Philharmonic Society after Yuri Bakhshyan.