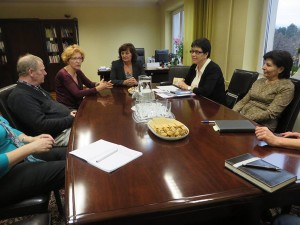 On November 11-13 series of meetings were held with the representatives of “The Bielsko Artistic Association Grodzki Theatre” NGO, Education Department’s officers, representatives from a range of European non-governmental organizations, local school teachers and schoolchildren in Bielsko-Biala city of Poland.
The first meeting was held at “Grodzki Theatre” NGO, where WFD NGO members got acquainted with the main directions of the organization’s activity, its beneficiary groups and the current projects.
According to the preliminary agreement a meeting was also held at the Education Department of Bielsko Biala city. Gohar Markosyan – president of WFD NGO presented in detail the Peace project being implemented at Armenian schools by the organization, successes gained and the positive impact of the project on schoolchildren. The members of the organization answered all the questions raised by the representatives of the Education Department, discussed the possibilities for further collaboration and localization of the Armenian experience. WFD NGO showed its willingness in organizing a training course for the teachers of one separate school or schools in Bielsko-Biala, showing support in the localization of Peace Education experience in Polish schools and in implementing pilot projects. Draft version of the collaboration project was presented to the Education Department, while the participants of the meeting were provided with the English version of the methodical handbook and the report on the evaluation of peace education impact. Those present were really interested in the project. Mrs Grabo – deputy head of the Education Department promised to have a closer look at the educational materials, organize separate discussions for possible collaboration and inform WFD of the results within shortest terms.
The next meeting was scheduled with the representatives of the 5 non-governmental organizations from Poland, Ireland and Iceland. The meeting aimed to present WFD NGO and its main activities; create a new network for further collaboration. Teachers from 2 schools of Bielsko-Biala were also present at the meeting who expressed their wish to have classes of conflict management at their schools with the handbooks developed by WFD NGO. An agreement was reached to share the achieved results, impressions and the feedback collected from pupils on the project with WFD NGO at the end of the classes.
WFD NGO team members had the chance to meet also with the schoolchildren and deliver them Peace card with the print of 12-years old Tigran Abajyan painting, who was the winner of “Lets live in peace with our neighbors” drawing contest. Ties with the Polish partners are established, possibilities for further collaborations exist.