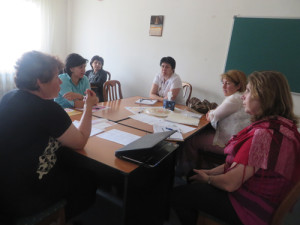 Regular quarterly reporting meeting with the Community Center Officers was held at WFD NGO office. In addition to the activities organized in the communities, the Officers submitted detailed reports of the social projects. The first phase of the small grants competition for the communities is over. The social projects submitted for the first phase by Lanjik, Torosgyugh and Arpeni communities are also over.
Only the restoration works on Tsoghamarg celebrations hall are in process yet. Tsoghamarg CC Officer Arevhat Mkrtchyan says that the community is very motivated, everybody is engaged in the restoration works this or that way, while the delay in the works is due to the greater number of males left for labor migration. She said that the number of labor migrants in the past years was 40, while this year 70 men have left for abroad work. “The change in the community is visible; people have become more mobilized. Their trust towards the Center’s activities has increased, as well as their conception of the voluntary work in the sense that they are the ones to do something for their community and try to solve the existing problems with their own efforts. Another big achievement was fundraising for the restoration of the celebrations hall; almost all the village brought its participation to it. There were families who donated more than the fixed 3000AMD. What is interesting is that the money was paid by the families who face difficulties in paying the land tax. “For me this is a big achievement and promising mobilization example”, said A. Mkrtchyan.

Lanjik, Torosgyugh and Arpeni CC Officers too noted the positive changes and achievements reached in the result of the social projects.

According to the words of the Officers people are very motivated; they have new plans and are looking forward to the start of the next phase.