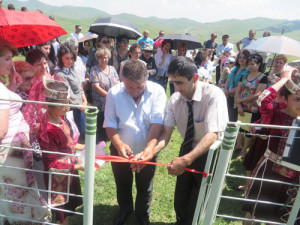 The mood was festive in Torosgyugh today. After 3 months’ preparation, improvement and tree planting work, today was the official opening ceremony of the Community garden.

Myasnik Hakobyan, a community member and the former school principle of Tsoghamarg village, gave an opening speech and in detail reported the audience about the works done. He thanked Torosgyugh village mayor Armen Sargsyan, WFD NGO, “Armenia Tree plant” project for their support to make the concept of the garden a reality.

Expressing her thanks to the initiators and the supporters, WFD NGO president G. Markosyan noted that the project wouldn’t be fulfilled if it weren’t the community mobilization and devotion; despite the bad weather conditions people brought their voluntary participation in the preparation, tree planting activities of the garden. G. Markosyan granted Letters of Appreciation to village mayor A. Sargsyan, teaching staff and the pupils who, with the initiative and direct engagement of the school principle G. Hakobyan, actively participated in the building of the garden and with their example encouraged the villagers to get involved in the problems of their own community.

Village mayor A. Sargsyan and the school principle G. Hakobyan took the honor of cutting the ribbon. Afterwards the festive mood was followed by national singing and dancing. Community dance group pupils and schoolchildren performed for the spectators. Pupils of the school painting class were also present and showed the beautiful nature and the rich-flavor of the village through their paintings. The kids played with easy laughter on their faces, jumped and enjoyed the joyous atmosphere.
On G. Hakobyan’s own initiative the garden was divided into 12 land lot areas and the community people were the ones in charge for their further maintenance. The distribution of the land lots among 72 families of the community was done by lottery. 6 families are charged to look after each land, cultivate and design it. It is also planned to place benches, dustbins, to pave walkways, etc.
The most important component of this concept is that the community people themselves are responsible for keeping the garden clean and beautiful, which helps them to be more careful towards the garden. This will stimulate their voluntary engagement in the community issues, as well as will help them to value the availability of clean and sustainable surroundings to protect it for the coming generations.