Area 1226 hectare
Population 316
Torosgyugh is situated on the northern foot of Shirak Mountain in the north-west of the Republic of Armenia. The village is considered to be founded in 1828. The community is a neighbor to Goghovit, Arpeni, Tsoghamarg settlements.

Torosgyugh was founded in 1828-30 by the migrants from Harsenqar village of Verin Basen of the Basen province in Mets Hayk in Western Armenia. Inhabitants of the village are mainly Armenians. Collective farming in Torosgyugh was established in 1933, which became state farming in 1978 and was dissolved in 1991. Main branches of agriculture for this period were grain cultivation like wheat, barley and cultivation of forage plants like melilot, potato, as well as cattle breeding.
General privatization process in the village was carried out in 1990-94. In the result family farms were formed.
St. Astvatsatsin church of the village was reconstructed in 1865. It served as a school during Soviet times, later on was a cheese factory and now it is semi-destroyed due to the lack of attention.
The school was founded in 1920; a new typical building was constructed in 1990. The house of culture started its activities in 1938: A new two-story building was constructed in 1990.
Village has no gas supply and telephone.
It is at the height of 1900 – 1960 m above sea level.
Currently the village has 1226-1372 hectare area and 316 inhabitants.
There are 75 households in the village. It has a school, a library, a medical point and communication. A monument to the victims of Great Patriotic War was built in the village in 1975. There are great supplies of drinking water in the village available due to natural springs.

A Community center was established in Torosgyugh in 2011 with the support of “Women for development” NGO. The center aimed to encourage the formation of healthy and peaceful lifestyle in the community assisting to the creation of a peaceful and healthy environment. On this purpose actions were taken to develop participatory approach and interest among Torosgyugh community members to create peace and peaceful conflict resolution culture, develop skills in leading healthy lifestyle and health protection among Torosgyugh community members; stimulate work towards the institutionalization of peaceable and healthy centers.

A group of activists was formed during the 2 years of the center’s existence who participate in the activities to reveal community’s primary issues and try to solve them.

With the initiative of “Women for Development” NGO and the “Community center” together with the village mayor, council members, school and kindergarten staff, as well as community members, Torosgyugh complex development plan 2013-2014 was developed. The strategic plan defines the main directions of community development for 2 years. It will become a guide in keeping the quality and high-level of community services, in promoting and increasing them. It will have great impact on the mobilization process of community members and on their participation in the revelation of community issues.

The goal of the project: through solving ecological problems to support mobilization of Torosguygh community, organization of the free time of the population

The attitude of the community towards public work has changed 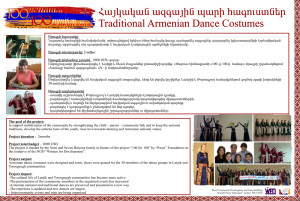 The goal of the project: to support mobilization of the community by strengthening the child – parent – community link and to keep the national traditions, develop the esthetic taste of the youth, raise love towards dancing and Armenian national values.

Project total budget – 2000 USD
The project is funded by the Nairi and Sevan Balyans family in frames of the project “100 for 100” by “Paros” Foundation on the initiative of the NGO “Women for Development”.

Project output:
Armenian national costumes were designed and sawn, shoes were gained for the 30 members of the dance groups from Lanjik and Torosgyugh communities. 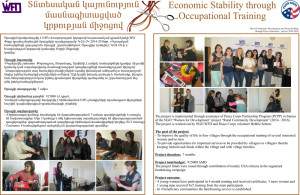