September 21 is announced as International Day of Peace announced by the United Nations. This holiday that has been celebrated for 30 years already. This year the UN Department of Public Information jointly with the Embassy of Federal republic of Germany, Armenian Ministry of Foreign Affairs and WFD organized an event on peace and democracy under the slogan “Peace is the mission of UN”.  The event was organized within the framework of the International Day of Peace and the International Decade for a Culture of Peace and Non-Violence for the Children of the World (2000 – 2010).

The aim of the event was to commemorate the values of peace and democracy, to highlight the achievements of the project “Peace and Conflict Resolution Education in schools” implemented by WFD. Representatives of WFD beneficiary schools were also invited to participate in the event. 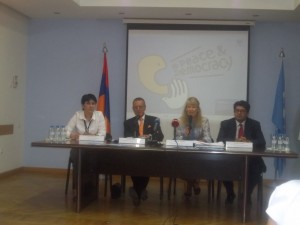 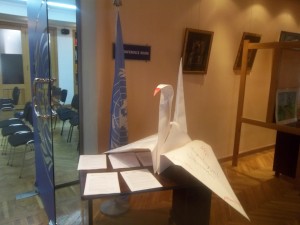 Maria Dotsenko, UN Department of Public Information Representative, greeted the participants of the event and congratulated them on UN International Day of Peace and the 20th Anniversary of Armenia’s Independence, mentioning that these two holidays nicely coincide.

She said: “Peace and democracy are core values of the UN and are crucial for human rights. Every year on International Day of Peace people around the world advocate for peace, dialogue and harmony, and the young have big role in spreading democracy and peace”.  The Ambassador of Federal Republic of Germany to Armenia Hans-Jochen Schmidt also congratulated the participants on the 2 holidays and spoke about the Peace Education project implemented by WFD in schools, saying that it should become an example for all the teachers and lecturers teaching their students conflict peaceful resolution methods.  Gohar Markosyan, President of WFD, spoke about the project “Peace and Conflict Resolution Education in schools”, gained experience, achievements and future plans. She also spoke about the positive impact of the project quoting written opinions of international experts, schools directors, parents, teachers and students.  During the event members of “Peace Education” center of Gyumri School after L. Byron and the responsible teacher Anna Harutyunyan also spoke about the positive changes that supported peace education, highlighted the influence of such education on both schoolchildren and teachers. She spoke about positive changes in the school environment and recommended to implement the project in more schools. 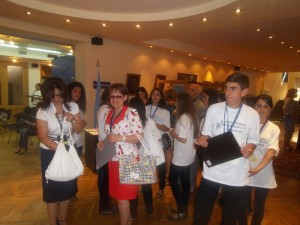 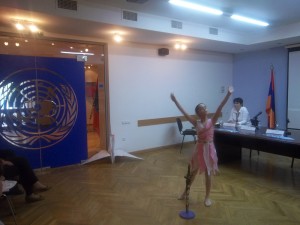 Appreciating the 10-year experience of the WFD in peace edcucation, Maria Dotsenko, UN Department of Public Information Representative, granted the President and the schools with the Certificate “Friends of UN” for outstanding participation and contribution to peace education.  The event was concluded by the exhibition “Peace through my eyes” presenting the works by Gyumri School N 20 pupils.