On April 27-28, 2011, a two-day training “Community Mobilization through the work of volunteers” was organized in the frames of the project “Community mobilization in Armenia through raising participation, healthy lifestyle and peace education” at WFD office. Participants of the training were community centers’ responsible persons and volunteers (21 participants) from five beneficiary communities – Goghovit, Lanjik, Bayandur, Musayelyan and Krashen.  Training which was lead by Gohar Markosyan, the President of WFD, Susanna Ghazaryan, Head of Educational Department and Armine Shiroyan, community project coordinator. It consisted of three parts: 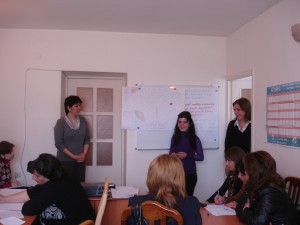 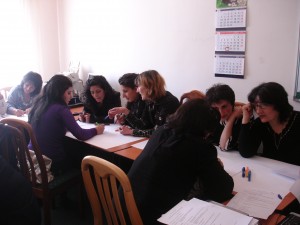 The participants were introduced to the concepts of community, why community mobilization is important, who volunteers and community activists are, what is their role in raising the problems and needs of the community and in the development of the community.  Participants of the training presented the problems existing in their communities, what can assist the mobilization and development of their communities, what the obstacles exist and how they can be overcome. The role of community centers in the solution of the existing problems, organization of different events and mobilization of the population was especially stressed.

Participants got acquainted with the causes of conflicts, strategies of activities in conflict situations and ways of conflicts peaceful resolution. Group work was also carried out. Activities of the community centers planned to be carried out in the nearest three months and organizational issues connected with them were also discussed.  All participants mentioned that the training was very valuable and useful. They also suggested organizing trainings on the same issue for the population of their communities.