Since 2011 the government of the RA has initiated and started to gradually implement community consolidation plan as a step directed towards the improvement of the existing public management system.

* Starting from 2021, these communities have been united as part of the Ashotsk consolidates community. 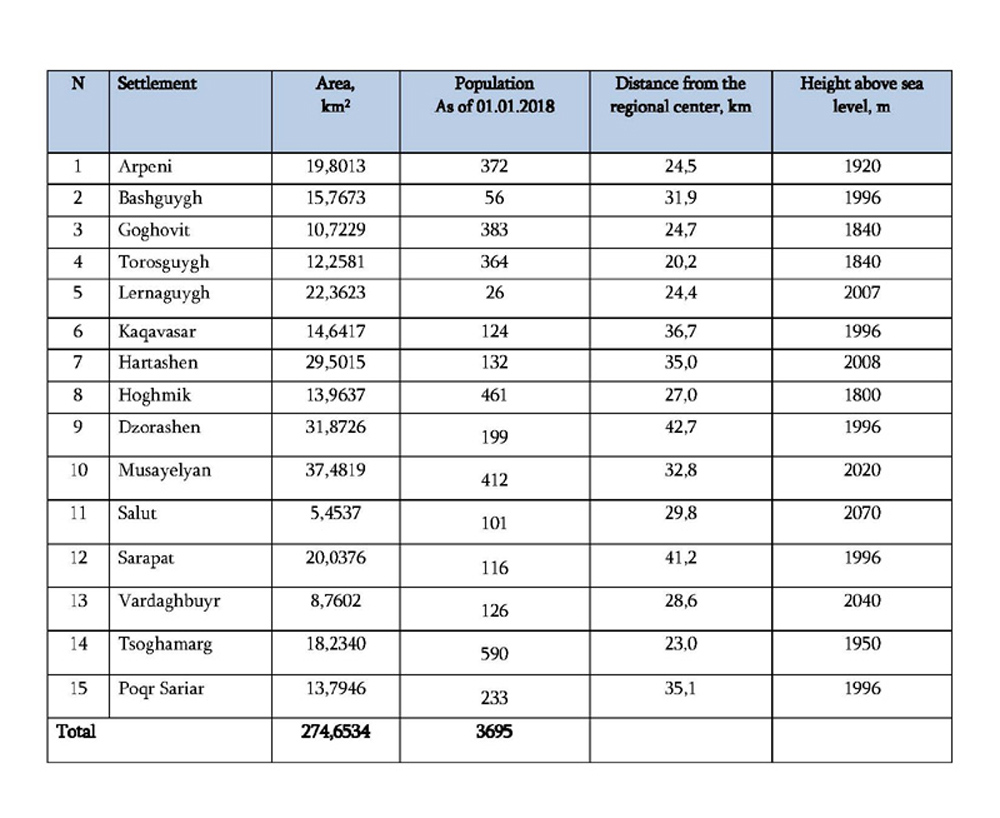 The mountainous terrain is mainly foothills, in the east and south it is mountainous, with a height of 1800-2200 m above sea level. Tha area is mainly a wave plateau and highlands in Shirak and Bazum mountains. The Eastern border of the area is the Tsoghasar Mountains, which are Western Slaves of Bazum Mountains, and in the South – Shirak Mountains.

The climate is moderately continental. The summers are warm and dry; winters are long and cold with solid snowfall. The absolute temperature is +36°C in summer and -36°C in winter. Annual atmospheric precipitationa make 500-700mm. Sometimes there are strong winds, mostly East and North winds with a velocity of 3.5-6.0 m / s. In winter the snow cover reaches 80 sm. Intercommunity roads have problems because of frequent snowfalls.

Steppe and mountainous landscapes are prevailing. One part of them is pinched; forest areas make about 892 ha, mostly with common artificial plantations with pine trees. The cultivated lands have a blackout structure. The rivers with their tributaries are the Hoghmajur with Akhuryan left side tributary, the Vardaghbuyr River with Ashotsq tributary, the Chichkan River with Pambak tributary. There are high quality drinking and mineral water numerous natural sources everywhere in the region.

The region is located on Armenia- Georgia international road and has no railway communication, in the distance of 21 km from the regional center Gyumri (Torosguygh), which is the main market of agricultural production of the region.

The target region consists of 15 villages, which are consolidated in 1 community, with the centre in Torosguygh. The community has local self government bodies – the head of the community and a council with 9 members.

The permanent population of the region is 3695 people (as of January 1, 2018), and the average density is about 14 people (the average republican density is 100 people per 1 sq. km). The South-wester part of the region (Hoghmik, Tsoghamarg) is relatively densily populated. The local population is mainly in the working age group.

The population of the region is mostly involved in agriculture – cattle breeding and crop production. The agriculture is run in the way typical for the mountaineous climatic and agrotechnical conditions; another popular activity is bee keeping, and horticulture has small volumes and is mostly developed in the southern 4 villages. Crop production is run through individual peasant farms, on the privatized, homestead and rented lands, relatively favorable for farming. The main crops are cereal crops, herbaceous herbs, orchard crops and potatoes. The obstacles for the development of crops production are particularly problems with irrigation, fertilization and agricultural equipment. Irrigation water is available almost everywhere in the community, but the irrigation system is in ruin. The community has recently purchased new agricultural machinery: one combain, two tractors, three motors, but the rest of the machinery in the community is mainly in bad condition. Only 17% of arable land is being cultivated, the rest is mainly used as grasslands.

Networks under municipal service generally need repair, there are considerable water losses. Irrigation water is available in the region, but the system which was built in the soviet period is completely ruined, there are partially working areas (Hoghmik – Goghovit). The current irrigation is done exclusively by gravity. Garbage disposal: This service is not provided in the region.

There is only one public transport from the Salut area to the regional center (working 3 days a week). Our survey show that the issue of public transportation is considered as a very urgent one (sometimes as the most urgent problem) by the population of the villages which are located farther from the highway – Hoghmik, Dzorashen, Lernaguygh, Sarapat, Arpeni, etc. Private cars are used as the main transportation means.

Secondary schools are available only in 8 settlements out of 15. There is a basic school in one settlement, elementary schools function in 4 settlements, 3 of which are elementary classes as part of the schools functioning in neighboring villages. And in 2 villages there are no schools or classes at all (Lernaguygh, Bashguygh). There are pre-schools in 6 secondary schools. There are no kindergartens in any of the settlements of the community. The so-called “optimization” of the schools is athe main reason of the population migration and the emergence of abandoned villages.

Medical points are available only in 13 villages. The 2 other villages use the services of the neighbouring ones.

Culture houses are available only in Torosguygh, Goghovit and Arpeni, and there is a club in Hoghmik.

This service is insufficient in all the villages, the population points out the need for increasing the number of lighting points and their equal distribution in the rural area. In the case of new lighting points, it is preferable to install LED energy efficient lamps that are 8-10 times more effective than conventional incandescent lamps. 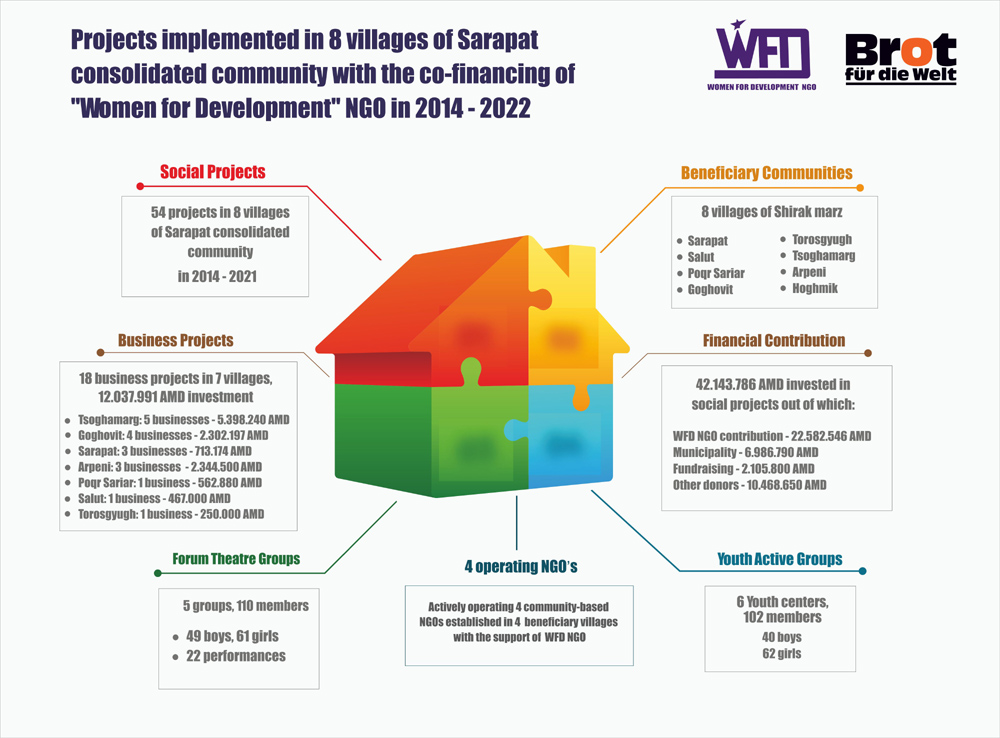