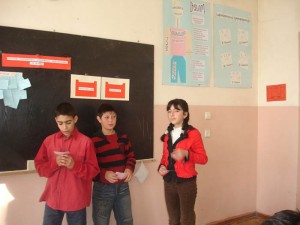 December 1-4, 2009 WFD conducted lessons on the topic “Gender and Conflict” were conducted in “Peace Education Centers” of some schools of Gyumri. During the lessons more than 85 schoolchildren of 7-9 grades received information on the history of the campaign “16 days of Activism Against Gender Violence”, joining their voice to the struggle against gender violence.

Here are some of the opinions of the schoolchildren:  “… a woman also can lead, but it is accepted that the man is a leader…”

“… in order not to have arguments, the boy and the girl should protect each other, no matter who it is  – a boy or a girl…”