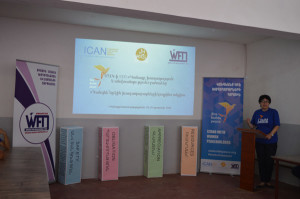 As a Women’s Alliance for Security Leadership (WASL) and International Civil Society Action Network (ICAN) member, Women for Development NGO also joined the “She Builds Peace” campaign, launching an event for more than 32 youths from the beneficiary communities. Because of the COVID-19 Pandemic, the event was postponed several times. Even though on the 2nd of September we managed to launch the event.

During the Event, WFD NGO President Gohar Markosyan presented to the participants the UN Security Counsil Resorution 1325, which calls the member states to ensure a more active participation of women in conflict prevention, regulation and resolution, emphasizing the role of women, especially in ensuring peace and security.

This is the first fundamental resolution on women, peace and security highlighting the fact that conflicts affect women and men equally but meantime differently.

National programs towards the implementation of the agenda have been developed during the last 2 decades in different countries, concrete actions were taken towards maintaining peace and security, as well as raising women’s role.

The Armenian government has approved a National Action Plan for 2019-2023 on the implementation of the UN 1325 resolution.

During the Event those present also talked about the story of the legendary bird Simurgh and its virtue.

By joining “She Builds Peace” campaign, Women for Development NGO brings its support to women peacebuilders worldwide and calls to:

Organizations and leaders of more than 28 countries in the world have joined the campaign.

Photos from the Event