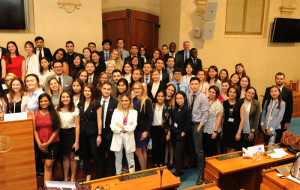 In August 2019, WFD NGO staff members Arpine Nikolyan and Anahit Hakobyan participated in the American Institute for Political and Economic Systems’ (AIPES) summer school in Prague, Czech Republic. This 3 weeks-long intense course was organized by The Fund for American Studies (TFAS), in collaboration with Charles University. The total number of the students was 114, representing 36 countries. During the course, the participants studied good society, political philosophy, political economy and conflict management.

The students were granted an opportunity of an internship at the Czech Parliament, where they participated in conflict management simulation based on the conflict between Russia and Ukraine. Armenian delegation, comprised of 4 people, stated its position on this particular conflict. During the program, a debate around the Armenian Genocide took place between Armenian and Turkish delegations.

After passing the exams and successfully finishing the program, the participants received certificates, which were awarded in the main building of Charles University.

Anahit Hakobyan’s and Arpine Nikolyan’s participation in this training course became possible with the financial assistance from The Fund for American Studies and “Women for Development” NGO.