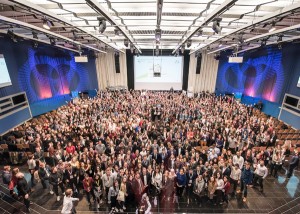 On the occasion of the commemoration of the World War I (1914-1918) end centenary, 500 young people from 45 countries gathered in Berlin for an international youth meeting from November 14th to 18th 2018. Anahit Hakobyan – project assistant from WFD NGO, was among the participants. The objectives of the youth meeting were to facilitate intercultural dialogue as well as to reflect on the events that occurred at the end of World War I from several perspectives and to discover the impact these events had on the countries involved and their societies today.

500 participants were separated into 20 groups in which there were 18-21 participants from different countries. They were working together for three days and developed concrete ideas for peace. Each group had 3 experienced youth leaders supporting them in their efforts. At the end of the meeting 20 ideas for peace were generated. These ideas were varied and linked to education, exchange programs, online platforms that would contribute to peacebuilding.

The workshop program was framed by opening and closing ceremonies at which high-ranking politicians were present, including the President of Germany Frank Walter Steinmeier, President of France Emmanuel Macron and Federal Minister for Foreign Affairs Heiko Maas. At the conclusion of the meeting, the young people presented only 3 ideas out of 20 which were discussed with the politicians, thus giving the youth a voice in building a peaceful and conflict free future in Europe and in the relationship between  Europe and its neighbors.