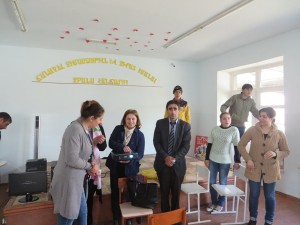 The project of creating a cinema club was submitted to WFD NGO for the third phase of the small grant programmes announced in frames of “Community based rural development and peace building through peace education” project.

The project submitted by the Community centre’s activists aims to effectively organize the leisure of the community youth through creating a cinema club. Project initiators are sure that the cinema club will contribute to the mobilization of young people over one idea, will raise their awareness on various aspects, will make them get more actively involved in the community life, while the discussions and the exchange of opinions held after watching educative films will develop critical thinking and the ability to dispute among them. Within the project it is envisaged to create a film library for different age groups. Films and educative programs will be displayed once or twice a week and depending on the plot a relevant age group of audience will be selected.

The aforementioned technical equipments will also be used during the events organized both at school and in the community.