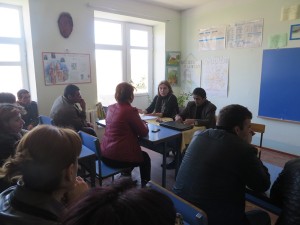 The follow up meeting in Torosgyugh within the framework of “Capacity building in agriculture in the rural communities of Shirak marz for green future” project was aimed to the creation of a farming group. Young farmers, village residents who were interested in the project and were enthusiastic about the usage of the innovative ideas and new technologies in their village, attended the meeting.

Project’s community officer A. Shiroyan once again presented the audience the project goal, objectives and the outcomes, talked in detail about the necessity of creating a farming group, about its functions and responsibilities, answered all the questions raised by those present. A farming initiative group of 17 members was created in the result of the discussion who later on will become the direct beneficiaries of the project, while the community residents of Torosgyugh village, as well as the villagers of the other communities of Ashotsk sub region will become the project’s indirect beneficiaries. They will participate in the trainings organized during the whole period of the project implementation, will visit the learning and exhibition center to use the new agricultural technologies in their farms.

The 17 members of the group (9 men and 8 women) represent different families in the community, since one of the mandatory conditions for the creation of the farming group was that only one person from each family joined the group. By the unanimous decision of the newly created farming group members Myasnik Hakobyan was appointed president of the group.

Parallel to the construction works of the area, the next step of the farming group will be the registration of the group as a co-operative organization functioning in the field of agriculture. This will let the group independently apply to various organizations in future in order to expand the scope of its activities and receive grants.

P.S. The area located for the hothouse has been completely fenced with the joint efforts of the community members, while digging activities of the basement are in process at present.