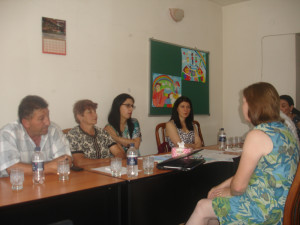 On August 17 the second phase of the call for small grant projects announced in frames of “Community based rural development and peacebuilding through peace education” 2014-2016 project took place. The project is being implemented by WFD NGO.

Before the new proposals were discussed, a representative from each community reported on the achievements and the successes gained in the previous phase of the projects. Later on proposals of social projects submitted by the 4 beneficiary communities of WFD NGO – Torosgyugh, Lanjik, Arpeni and Tsoghamarg were discussed. Priority was given to those projects that had community development as an overall direction, while a mandatory requirement was that the project objectives were in line with the issues raised in the community development strategic plans.

As a result, 4 projects submitted by the communities that received the highest points were approved by the commission.

1.​ “Lanjik as a cultural community” project – purchase of modern dancing costumes for the new dancing group of Lanjik community

4.​ Continuation of the restoration works for Tsoghamarg community Events Hall.

Deadline for the project implementation is December, 2015.