“This event was a victory for me” lines are quoted from the thank-you letter written by Lanjik community officer Armenuhi Arakelyan.

WFD NGO too extends its thanks to A. Arakelyan for her devoted and efficient work, as well as to all those who brought their support to the successful launch of this wonderful project. Here is A. Arakelyan’s letter in full. 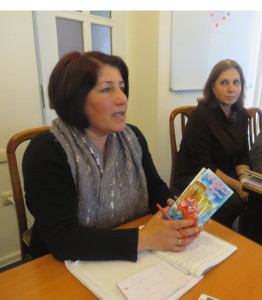 The start of the New Year 2015 was full of happy mood and surprises for the people in Landjik. The visit of the Santa Clause and the Snow Maiden, the most expected and kindest guests in the New Year, brought joy not only to the kids but also to the adults.

3 years ago I had an idea to obtain Santa Clause and Snow Maiden costumes, for the availability of those costumes would have changed the New Year atmosphere in the Community, the New Year events would have been more beautiful and festive. Unfortunately due to the lack of donors the idea was always postponed.

In November 2014 together with Lanjik Community Center activists and with the support of “Women for Development” NGO (WFD NGO) we wrote a small grant project  “Give Kid’s a Smile”. The project aimed at obtaining Santa Clause and Snow Maiden costumes, as well as costumes of children’s beloved cartoon heroes. In case we had the costumes, together with the community volunteers we would be able to implement our project of making the New Year, children’s holidays, events, children’s separate birthdays memorable and interesting.

Due to fundraising and the financial investment made by WFD NGO the Organization managed to purchase Santa Clause and Snow Maiden costumes which were so amazing, luxurious and natural as if they were taken from a fairy tale. On December 26, during school New Year event, the sudden appearance of Lanjik volunteers in the costumes of Santa Clause and Snow Maiden surprised and delighted the audience. After bringing joy to schoolchildren they made their way to kindergarten where another festive event was organized. We could see great admiration, contented looks, joyfully shining eyes both on the faces of the adults, kids, teachers and parents.

The New Year festive mood and surprises were finalized by the community donors. Community mayor Ara Mardoyan, villagers Hamlet Hovhannisyan and Mekhak Mkhitaryan prepared sweet bags, cards and gifts for the children, so that Santa Clause wouldn’t visit them with empty hands.

But the surprises were not over yet. On my personal initiative and with the support of the community mayor Ara Mardoyan, for two days Santa Clause and the Snow Maiden also visited more than 180 families in the village congratulating and bringing joy into their families. All families without exception received New Year greeting cards on behalf of the village municipality and the Community center. I can’t find words to describe the inspiration dominant in the community those days. I couldn’t remember an event that had joined all the villagers without exception, and this was one of the single cases when everybody was pleased and thankful to the organizators.

This event was a victory for me as it really became a community event that brought everybody together. The fact that the community center volunteers together with the village municipality staff had prepared greeting cards for all the families of the community, organized the visits of Santa Clause and the Snow Maiden, is a community mobilization success story in itself.  While the fact that 28 year-old villager Samvel Raphayelyan, father of 2 children, had willingly offered to become a Santa Clause and visit all the families in the village, is a cultural change (There are almost no such examples in the villages throughout Shirak marz; men just “don’t imagine”, they can perform such public actions).

The project isn’t over yet and there are new surprises waiting for the children in our community. With the financial investment of WFD NGO and Lanjik village municipality the full package of the project will be called to life.

I thank to the organizers, benefactors and to all those who helped us with money and labor to make this New Year unforgettable.