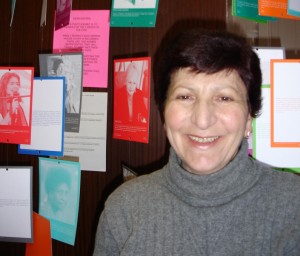 Armine Mikayelyan /Kirakosyan/ was born on January 2nd, 1954 in Leninakan. From her parents – Arshaluys Kirakosyan and Seda Abrahamyan, she inherited her best qualities – hard work, high sense of responsibility, being goal-oriented, grace, dignity, great communication skills, ability to establish great relations and to maintain those.  After graduating with honors from Leninakan school #23, she dreamed of becoming a doctor, to continue her mother’s and sister’s profession. Even though her dream did not come true, she loved natural sciences so much, that she entered the Department of Physics and Mathematics of Leninakan State Pedagogical Institute after M. Nalbandyan in 1973 and graduated it with honors in 1977.  During her student years she got married and had her birst baby. She very often recalled that her son Arman was born only 2 days prior to state examinations for graduation, and that she was studying even during the days spent at hospital.

Her great desire to work and continue her studies, to reach more, took her to the Institute of Geophysics and Engineer Seismology in 1978. While continuing to work there, she started her post-graduate studies at the RA Academy of Sciences, Department of Geophysics and she finished her studies in 1985. During her post-graduate studies her daughter Liana was born.   Armine could amazingly manage to dedicate herself to the family, work and studies, and she never complained.  Her candidate thesis was ready in 1988, and by chance, on December 7th she was in Yerevan for taking care of the final preparations for the defense. She heard about the earthquake when she was at the university, and, like she told later, she did not realize how she came to Leninakan to see her building completely ruined together with the school which her son and daughter attended. She succeeded to reach her parent’s house, which did not ruin and found all her relatives alive. 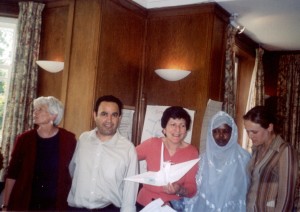 But horrors of the earthquake did not make her surrender. In March 1989 she defended her candidate thesis and received her degree of Candidate of Geophysical Sciences.   Then there was work again, scientific papers, conferences, becoming familiar with international organizations, new cooperation and establishing new contacts, developing joint projects, etc. Career growth from Junior Scientific Worker to Leading Specialist, Chief Seismologist of the National Survey of Seismic Protection to the Head of Public Relations Department – one of the most important ones. Armine succeeded to take the works implemented in the sphere of seismic protection in Armenia to international level – highly due to her her hard work, strenght and being goal oriented.   Starting from 1997 she became the leader of “Women for Development” NGO, which was established by her, and combined public activities with her scientific work until 2004. The results of her dedication to work were not long-awaited. Both the organization, and its leader very quickly gained international recognition. Armine Mikayelyan’s experience became highly valued by international community, especially her knowledge and skills in the sphere of natural disaster risk reduction. As the result, she became a UN expert and was invited to participate in a number of discussions and conferences on disaster prevention and risk reduction:   – Istanbul, Turkey, 2001, “Environmental Management and Natural Disaster Risk Reduction, Gender Perspectives” (working group meeting)  – Honolulu, Hawaii, 2004, “Gender Equality and Disaster Risk Reduction” (International Conference) 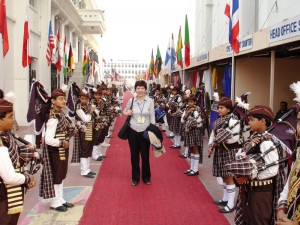 Starting from 2002, Armine dedicated her efforts and skills to the implementation of an educational strategy of  peace and conflict resolution education in schools. It was an innovation in terms of both training materials, and training of specialists. There was a need to learn and to train others. The gap was filled by participation in different international training courses, summer schools and conferences: - Brattleboro, Vermont, USA, 2002, summer school on “Peace Building and Conflict Transformation”  – Soethberg, The Netherlands, 2003, “Conflict Resolution in Schools, Learning to Live Together”, International Conference  – 2004-2006, UNESCO/EURED  “Human Rights and Peace Education in Europe” two-year teachers training course – New York, USA, 2005, “From Reaction to Prevention; Civil Society Forging Partnerships to Prevent Violent Conflict and Build Peace” UN International Conference.

Afterwards and during the mentioned period, there was a number of paper presentations at conferences, sharing achieved results with international colleagues, unlimited pride for success of her pupils and Armenians… There are people, who carry out any kind of small or big tasks with the same spirit, sense of responsibility, love and dedication, who are able to share that love with their environment. Armine was one of them. She would do everything to be the first everywhere – both as a person, and as the President of the organization. Due to her activities, the organization became recognized in many countries of the world, together with her implemented projects and achievements.