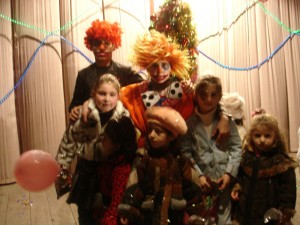 On December 29, 2009 a New Year’s and Christmas party took place in the Bayandur village community center. The initiator of the event was the major of Bayandur community Hovagim Sargsyan. At the beginning of the party on behalf of himself and the population of the community he expressed their gratitude to the WFD for establishing a community center in their village, organization of useful meetings with the population and assisting them in their

initiatives. During the event, children of Bayandur presented themselves through reciting poems, singing and dancing. The audience was also pleased with the performance of the members of the Arts school who played the unique national musical instrument (parkapzuk). At the end of the party the children hosted Santa Claus, who came with presents for them. Though the small kids didn’t understand who Santa Claus was, the audience recognized who was hidden under the clothes of Santa. It was the major of the community, Hovagim Sargsyan, who sang and danced with the kids, distributed presents and sweets. The village population expressed their gratitude to the major of the community for turning that day into a real holidays for their kids.

It is also worth mentioning that on the eve of the previous year Hovagim Sargsyan, dressed in Santa Claus, made a tour round the village on a sledge, greeting the villagers and distributing presents to the children.