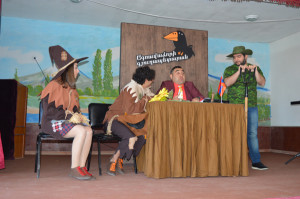 On November 8th, in frames of the joint project being implemented with the UNFPA, and upon “Women for Development” NGO’s invitation, Lanjik Secondary School has hosted the representatives from the “Theatre for Changes” cultural NGO.

“Theatre for Changes” has over 12 years’ rich experience and is the leading interactive theater in Armenia. As it was mentioned by the founder and creative director of “Theatre for Changes” Hayk Sekoyan, theatrical performances are considered one of the most influential tools, which could be applied on human beings, and the genre of the interactive theater allows for making the audience a direct participant of the performance, thus having the power of changing the flow of the play and suggesting their own ways for the ending. For this reason, interactive theater is used as a tool for making social, political and economic changes. The group comprises of professional actors, who are touching upon various topics during their performances, such as interpersonal and daily conflicts, migration, needs of people with disabilities, and other themes which are hard for people to discuss in formal circumstances.

“The Unexpected Decision of Scarecrow Nazik” play provoke high interest and enthusiasm in the audience, who was actively participating in the discussions, people were debating and criticizing the behavior of various actors and proposing their ways of resolution.

Members of Lanjik and Anushavan villages’ Forum Theater clubs were present at the performance, which served as a master class for them.