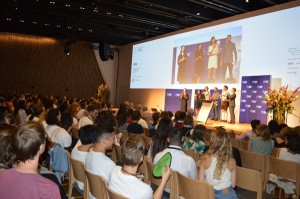 Recently,  the Austrian Development Agency (ADA) Vienna’s Office  sent us the ”World News” magazine’s last number’s hard copies of 2018, which included the staff member of “Women for Development” NGO Nikolyan’s hint, where Arpine shared the organization’s activities, her work with young people, as well as impressions from the “European Forum Alpbach 2018”.

The magazine is published four times a year and informs 43,000 interested parties about current topics, projects, programs and strategies of international and Austrian development cooperation.

Let us remind that in August 14-31, 2018, the European Youth Forum entitled “Diversity and Resilience” took place in the city of Alpbach, Austria, in which Arpine Nikolyan and Anna Simitchieva from Women for Development NGO participated. The Austrian Development Agency and Austrian Telecom have provided them with scholarships for attending the conference.

The forum was attended by 700 participants from around the world. Among them were youth workers, students, researchers, economists, politicians, ministers, representatives from the field of business, education, culture and others. The scholarship holders had an opportunity to attend and participate in debates, meetings, and discussions of political figures invited from the conflict-affected countries.