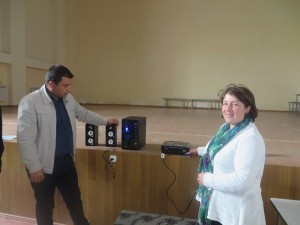 Quarterly meetings with the Community centres not only aim to submit reports and present the works done, but also make an opportunity for the participants to share new projects and interesting ideas.

The idea of organizing leisure time for Torosgyugh youth and establishing a cinema club in the community attracted Lanjik community officer Armine Arakelyan as well. Taking into consideration the community needs, Armine together with the initiative group submitted the project of establishing a cinema club in Lanjik to the third phase of the small grants programme announced by “Women for Development” NGO.
The goal of the project is to contribute to the development of the cultural life in Lanjik community and provide the effective organization of leisure time for youth and different age groups.

The project initiators are quite sure that the cinema club will contribute to the mobilization of youth over one idea, will increase their awareness on various aspects, they will become more actively involved in the community life, while the discussions and the exchange of opinions held after watching educative films will develop critical thinking and the ability to dispute among them. It is also planned to create a film library for different age groups within the framework of the project. Films and educative programs will be displayed once or twice a week and depending on the plot a relevant age group of audience will be selected.

Today WFD NGO handed to Lanjik community the technical equipments envisaged to be procured by the project, i.e. the projector and the loud speakers, which hereinafter will be used for the dance studio and the theatrical group in Lanjik, as well as during the events to be held at the school and the kindergarten.