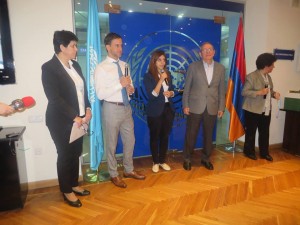 An exhibition dedicated to peace titled “Let’s Live in Peace with our Neighbors” was launched today at the UN House in Armenia. 165 school-children from 8 regions of Armenia participated in the contest organized by World Council of Churches Armenia Round Table and the NGO Women for Development. The UN Department of Public Information Yerevan Office has joined the initiative by announcing through its Friends of UN network. The exhibition is a part of events marking the 70th  anniversary of the United Nations.

UN Resident Coordinator Mr. Bradley Busetto introduced the exhibition stating: “Peace as the first and main pillar of the United Nations has been challenged throughout the 70 years of UN’s existence. And especially this year’s International Day of Peace, which the UN member states celebrate on September 21, came at a time of deadly violence and destabilizing conflicts around the world, including in this region. People want and need to live in peace and dignity, but also feel secure and protected in their homes.”

Executive Director of the World Council of Churches Armenia Round Table Mr. Karen Nazaryan highlighted that this project aims to show to the Armenian and international community the voice of the Armenian schoolchildren and their wish to live in a peaceful country, thus contributing to peace building efforts in the region, which is crucially important today.

“During these days, humanity needs peace more than ever. Innocent men and women, children and elderly people are killed all over the world every single day,” added Gohar Markosyan, the president of the NGO Women for Development. She continued saying that every conflict can be resolved if neighboring countries and their people want to live together in peace. The participants highly appreciated the opportunity to express their visions of peace. They expressed their gratitude for the efforts of UN Armenia made towards helping young artists by spreading UN Values throughout Armenia. All children who participated in the contest received certificates of participation and special UN 70 gifts. 53 paintings were chosen and are currently being exhibited in the UN Lobby, the top three received awards while some others were given recognition by UN agencies. The exhibition will be open till the end of October.