Skip to content
Women for Development > Meet Our Beneficiaries 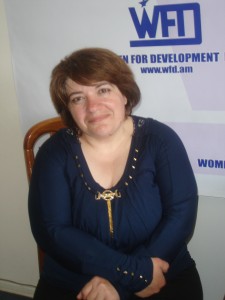 “…everyone can release their dreams: all you need is dedication and hard work.”

Manushak Nersisyan from Goghovit has been actively engaged in the work of Goghovit community centre since 2008. She has shared a few important events of her live and her involvement in the WFD’s activities.

“I learned needling from my mother, who was the teacher of arts at Goghovit secondary school. As a child, I would spend a lot of time with my grandmothers, who have taught me different handcraft techniques, including knitting. Our village was far from Gyumri and having walking difficulties made it impossible for me to continue my education in the city.

I started studying independently at home and developed my skills in handicrafts. Throughout this time, I was always looking for an opportunity to help my family financially.  It seemed almost impossible for a young handicapped woman living in a forgotten village of Goghovit. But that’s only the first impression.

WFD has played a major role in my life: they brought a fresh perspective and created a new environment in our community, many overcame depression and gained hope for a brighter future. I realized that the time has also come for me to step out of “my world” and participate in the development of my community. Along with others, I started volunteering for different events at the community center. Organization of such community events makes everyone’s daily life in the village more interesting and effective.

Seeing my passion and interest in teaching, WFD decided to help me go a bit further. With the support of WFD, I formed a group of more than ten girls/ young women and started to teach them handicrafts.

You cannot imagine how happy and proud we were to have the first exhibition of our works when a delegation of German Bundestag members visited Goghovit. WFD accompanied them and introduced our village. They highly valued and encouraged my work.

Another important period in my life started after my involvement in the Homeland Handicrafts Armenia. Through WFD’s assistance and arrangement Timothy Straight, the consul of Norway in Armenia and the manager of Homeland Handicrafts, visited Goghovit and got familiar with my works.
With greatest responsibility and fear, I knitted the first sweater sample. I cannot explain my emotions and happiness when I was informed that at Homeland Handicrafts they have approved the quality and design of the sweater. This meant that I would have more sweaters to knit for the Homeland Handicrafts. I make sweaters with various Armenian symbols on them, such as different Armenian carpet patterns, Mount Ararat, the Armenian alphabet and many more.

Thanks to the project, now I have a job, I am doing what I am passionate about and at the same time I can help my family financially. I had been waiting for this moment for such a long time.

Aside from this, now I have a group of young women and I teach them the knitting techniques, so that they too will be able to work and make their living.

WFD and the Homeland Handicrafts have brought light and hope into our way. I am so grateful for that. With their support and encouragement, I was able to step out of my world and break many stereotypes among people.

Through my personal example, I show that everyone can release their dreams: all you need is dedication and hard work. You need to work hard, unite people and look ahead.

“Fight for her rights as a mother and as a woman…”

We first met Roza Iskandaryan, 28 in Krashen one of our beneficiary communities. She was very depressed and stressed, and her parents had persuaded her to participate in our meetings.

Only a few weeks later, when Roza gained trust towards us, she told her story. We learned that five months ago she managed to escape from her husband’s house – beaten near death, however she was not able to take her two daughters 2 and 4 years old.

It took her more than two months to get treated and to think about returning her daughters. When we heard Roza’s story we decided to do our best and help her. She started to participate in our meetings, we tried to keep her in the center of our attention, even had private talks with her and tried to suggest possible solutions. Step by step the hope of living, fighting and bringing her children back became larger and larger. Roza became one of the most active members of the Peace Café and the community center in Krashen.

Furthermore, she decided to go on with her education and become a lawyer. First of all, she wanted to help herself and later also help other women facing similar problems.
Together with a small group of women interested in proposing for local governmental bodies, Roza participated in leadership trainings in Lithuania. From Vilnius, she returned as a self confident and motivated young lady. At that time, her lawyer and she had already submitted a case against her ex-husband to the court.  The process has been complicated, full of emotions and struggle. Her husband and his family were threatening children and putting moral pressure on them.

In the beginning, children were afraid to say what they wanted, and later they would repeat their father’s opinion. Court assigned a social worker and psychologists to work with children and overcome this stress. After months of procedure and numerous hearings, today the court has made a decision in favour of Roza. She is looking forward to the assigned day to bring her daughters back.

Roza took part in an event organised in the frames of “16 Days of Activism against Gender Violence” at WFD office, on December 1.
She was both excited and proud that she had managed to find enough strength and fight for her children’s rights and her rights.  “… I am very grateful to all WFD members and to the project I am involved in. Only due to your support and encouragement I was able to stand on my feet, overcome these difficulties, violence and depression. You helped me to find an unbelievable amount of strengths and faith to fight for my children and to fight for my rights as a mother and as a woman. Today I am ready to help other women who are in a similar situation, thank you once again…”

Roza looking forward to take her daughters back to her parents’ home, where she now resides.

“Applying peace education skills in the USA as an exchange student”

While in the USA, she tried to share her experience and knowledge in peace education with other students at host high school.

“In the school where I was studying there was a center for teacher-student and student-student conflict resolution. I was elected as the president of that center. Both teachers and students were helping me. The goal of this center was to create a peaceful environment in our school and improve students’ academic achievements.

At the center, we decided to peer her with a boy who had difficulties at school. Moreover, this boy had problems with his parents, had left his house and did not have many friends. He was sure that people did not like him and always ignore him and our team was trying to help him by proving exactly the opposite. After some time he learned to communicate with other students and made some friends: this also helped him to improve his grades at school.”