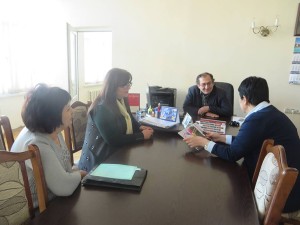 On February 17, 2017 WFD NGO representatives and Melanya Davtyan, Director of the Department of Supplementary Education of the National Institute of Education, attended “Conflict management education” open classes organized in the 4th, 8th and 9th grades of the school on the invitation of the directorate of Yerevan school #177 after G. Staravoytova. Classes in the said grades were very interesting and meaningful. The great work done by the vice-principle and the psychologist in integrating conflict management education into school curriculum was quite obvious. The most valuable thing to be mentioned is that the importance of the said education was highlighted for all age groups the elementary ones included. It is in this school that for the first time in our practice 2016-2017 academic year was declared PEACE YEAR on the initiative of the teaching staff; attempts are made to involve not only students, but their parents as well. One could see quotes and aphorisms posted in the corridors and visible places.

Peace education is spread not only through class head’s hours but also through peace events, paintings, handicrafts which we witnessed ourselves attending the school event dedicated to peace. Event was quite impressive. It was completely devoted to the insemination of universal values of love, peace and patriotism among younger generation. The songs, the literary works chosen, touching speeches devoted to the heroes of April war once again valorized the importance of living in peace and peaceful conditions. “All victories are gained with great difficulties and at the cost of multiple victims. If there is victory in one place, than there is mourning in the other. We say NO to war”,- with such words children addressed the audience and the people of the world.

Round-table discussion was held at the end of the event with the presence of the teachers and the guests who discussed issues on the importance of teaching peace education, efficacy of “Conflict management education” handbook, teaching methodology, also various suggestions were made and opinions exchanged.